Since its inception, our generation has struggled to pin down an answer to the question, “What is Twitter?” I’ve seen attempts at describing Twitter as microblogging, a messaging platform, a broadcasting tool, a social network, an information network, an interest graph, and real-time communication. Twitter, itself, has used phrases such as, “the world in your pocket,” and more recently, “a global town square.”

That it hasn’t (yet) been holistically and easily describable in a single phrase is part of the beauty of Twitter to me. It does so many things for so many people. Whatever adjective or metaphor used, I think of Twitter as a service. Because that’s how I’ve always seen it. It’s a service driven by the people and operated for the people. And it is literally in service to people around the globe.

Twitter is people-powered. It has always been about people. The way people connect to each other, they way they converse and interact, what people share, what they’re doing, what they’re thinking… and what they love. Twitter is unique and wonderful not because of the service itself, but because of the people who use it, and how they use it. END_OF_DOCUMENT_TOKEN_TO_BE_REPLACED

First, the whole point of this post. We’re expanding the Twitter Design Studio. Whether you’ve ever thought about working at Twitter or not, think about it now. We have a few open spots that we’re looking to fill in the next couple months. One of the desks in this photo of our studio could be yours. If we run out of space, we’ll make room for you. 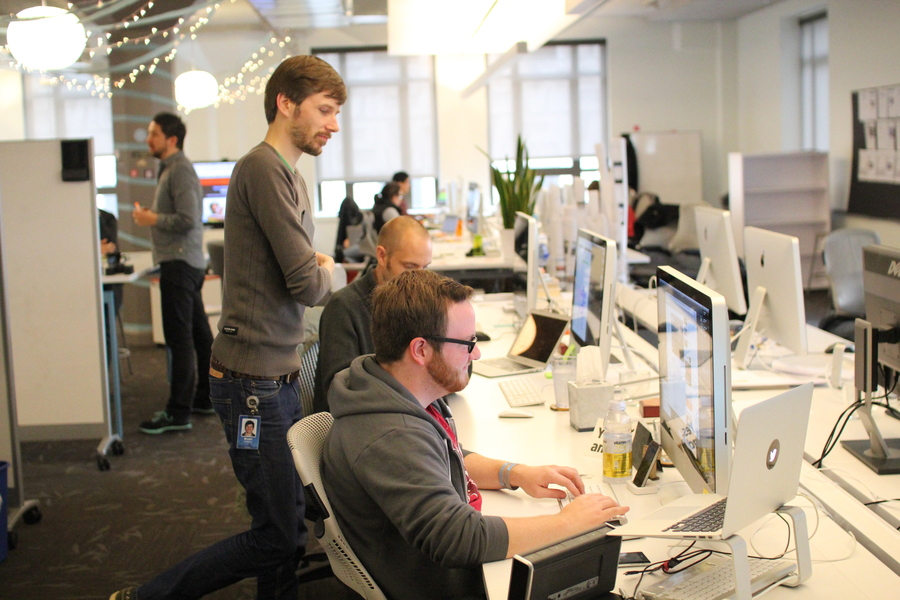 What we’ve been up to

We post samples of recent work on our Dribbble account. We’ve started posting photos of the studio and the team on 500px. (Some are embedded here in this post.) And, of course, we tweet too, from our team account, and all our personal accounts. Want to know more? Ask me or anyone on the team anytime. Here’s a tip: the service on which we all work makes us all easily contactable. We’re a pretty open bunch, and we’ll answer any questions as openly and honestly as we can. END_OF_DOCUMENT_TOKEN_TO_BE_REPLACED

Starting today you’ll begin to notice a simplified Twitter bird. From now on, this bird will be the universally recognizable symbol of Twitter.

Whether soaring high above the earth to take in a broad view, or flocking with other birds to achieve a common purpose, a bird in flight is the ultimate representation of freedom, hope and limitless possibility.

The Long and Short of It – super simple tweet embedding in WordPress wp.me/pf2B5-2pL

Last month, I posted a short little write-up about how I created my own tweet archive. It was a quick hack, pulled together one Saturday afternoon, and fairly incomplete, at best. But the archive serves its simple purpose every now and then. I intended to update the archive, add some features, and modify the theme files to better prep them for distribution. But I’m realizing I probably won’t get around to that any time soon.

I’m seeing lots of other folks building out their own archive. And lots of them are using the WordPress solution I wrote about. So in the interest of providing a rough starting point, I’m making the WP theme files for my tweet archive available here (under a CC license) for anyone who wants them as a base. Download tweets.zip (39 KB).

One followup note… Andy Graulund (@graulund) is building a similar tweet archive that is much more robust and more awesome than my original. His is a PHP-based solution (no WordPress required) with embedded media, permalinks back to Twitter, graphs showing tweet activity, and more. I believe he’s planning on releasing his source soon. Keep an eye out for that.

A year ago, today, I joined a small startup with a penchant for brevity. Many of my friends were using it. My mom had only heard mentions of it. I noted some risk, but saw greater reward. Variables were undefined. The product was still in its infancy. But potential was everywhere.

One year later, I’m just as eager and excited to head into work today as I was then. More so. Because I know even more about this growing company, the amazing people who work for it, the humbling principles under which it operates, and the myriad of purpose it serves. I’m thrilled with what we’ve accomplished in Design, and with the designers we’ve hired to do the accomplishing. We’ve pushed out some “good” and a fair amount of “awesome” so far. But we still have much work to do.

It’s cliché, but still true. Time flies when you’re having fun. And what fun we’ve been having. Here’s to looking back at a fantastic year, and forward to another that puts last year to shame.

In the past, I’ve wanted to browse or search through my own tweets. Viewing my Twitter profile is one way to do that. But if I want to browse back through history, it’s a chore to go back very far. And forget about searching through my own tweets on Twitter since Twitter Search currently only goes back about a seven days.

I know there are a few apps or scripts that create backups and much more for you. But I wanted a database and simple UI completely within my own control. One that wouldn’t go away if the developer abandoned it. So one Saturday a few weeks ago, in a little over an hour, I had my own, free, browsable, searchable tweet archive. Now I can easily browse back to my very first tweet, or search for those quotes by Paul Rand I tweeted last year. This isn’t anything entirely new. I’m just writing it up what works for me in case it helps fit some pieces together. END_OF_DOCUMENT_TOKEN_TO_BE_REPLACED

Though this may not completely eliminate liability if a publisher or artist rewraps a whole series of your tweets in a different shell, Zeldman makes an interesting point on the limitations of copyright in regards to short phrases (i.e. tweets):

As messages sent via Twitter cannot be longer than 140 characters, they cannot be copyrighted. However original, witty, or profound they may be, nothing more than good manners protects your original expression of authorship. If you wish to let other people quote or use your Tweets, you need not “license” them; indeed, technically, you cannot license them, since they are in the public domain the instant you publish them.

Craig directed me to this piece today after I complimented him on the new version of Twitterrific for the iPhone, stating how much I love seeing different approaches to Twitter client design. I hadn’t seen his post (from December 2008) before today, but it’s a good read that gives insight into some of the decisions behind Twitteriffic’s design that are still applicable now.

Personally, I welcome this competition. Seeing the work of other developers whose work I respect and admire acts as an inspiration. Looking at how other developers tackle a problem domain often adds insight into solving similar issues with my own code. In other cases, it shows me how I don’t want to implement a feature (without the need to prototype.) In short, competition will make Twitterrific better.

Yes, it’s true. After reading a bit of speculation over the past few weeks, I’ll confirm here that I am, indeed, joining Twitter. I don’t remember ever being as eager or excited to start a new job as I’ve been with this one. (Thus, why I only took one week off between jobs.) END_OF_DOCUMENT_TOKEN_TO_BE_REPLACED