After listening to Hillman Curtis speak twice today, (once for the opening keynote, and another for a session on design process) I now have nothing but respect for him, and gratitude for the inspiration he provided through what he had to say and how he said it. 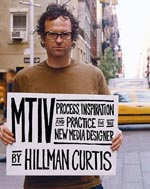 A complete reversal in my opinion of the man and his work. His recently released book, MTIV: Process, Inspiration and Practice for the New Media Designer, is one I’ll have to acquire soon.

What impressed me so much about Hillman’s keynote — titled “Stand on Someone’s Shoulders” — was the focus away from his own work. He was selfless and without ego. He admitted he was eternally grateful to the profession of design, which saved him from a fledgling career as a waiter and a punk rock artist. His delivery was refreshingly casual and entertaining; he spoke slowly and thoughtfully. (Of course the slow part may have had something to do with the Sudafed he took this morning to get over yesterday’s flu.)

I liked his visual presentation style. Each screen presented a simple concept, and never contained more than five or six words. They used simple phrases like avoid envy, erase cynicism, kill the lines, and don’t die on the subway. Easy things to remember which he verbally explained in further detail. In between each screen, a brief glimpse of an image provided visual context for the next concept. It was beautiful — this is what a presentation should be. As an aside, I’m sick of boring PowerPoint presentations that cram overburdened lists of information on each slide, only to get recited verbatim by the presenter. Who wants to listen to someone regurgitate bulleted lists? See Dan Brown’s Understanding PowerPoint: Special Deliverable #5 at Boxes and Arrows for a unique perspective and appropriate uses of PowerPoint.

If you ever have a chance to hear Hillman Curtis speak, take advantage of the opportunity.