In the first of a series, I present the original, undoctored photo used for one of the header images on Stopdesign. This one: the home page. There’s a story behind each one of them, which will help humanize the abstractions I’ve used for each header. This photo was taken while I was visiting Miami in November 2002 for the AIGA I|O: Interaction Only Conference. I dubbed it… The Drive-By. 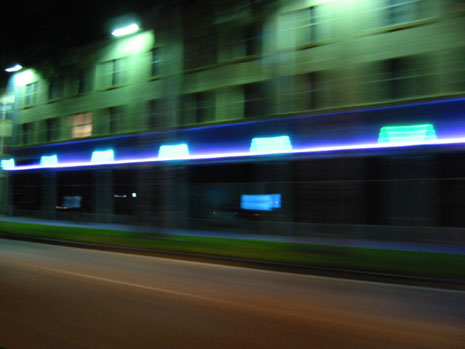 I think the building in the shot is some type of apartment building with retail space on the bottom floor. I was riding in the passenger seat with friends, Stacy and Kara Gary. (Stacy is a freelance photographer in Naples, FL.) They were showing me the sights and sounds of Miami since it was my first time visiting.

Temperatures were considerably warm that night. (90°F was the readout on a bank clock.) That’s nice for touring Miami at night, so all our windows were down. We were cruising along at about 45 MPH as I stuck my camera out the open window and snapped the shutter button. Thus, the original motion blur caused by the extended shutter speed of an automatic Canon PowerShot 300 with the flashed turned off. (I added even more motion blur for the header image.) A fluke that it came out so well. It was a joke that I was taking pictures at night with a point-and-shoot digital camera while moving at a decent speed. This shot became one of my favorites from the trip.