Q: What happens when you’re scheduled to appear at two conferences back to back to give a total of four presentations within six days, and you end up cancelling your appearance at one of the conferences because you’re unsure if your lower back, with a disc that herniated a month prior, might not do so well with the combined stress of preparing for and travelling to both events?

A: In my case, I arrived home from the second conference late last night to find this waiting inside the front door: 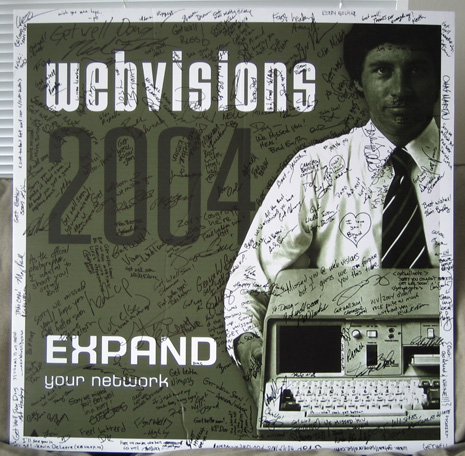 A giant (approximately 3′ x 3′) Get Well Soon poster signed by lots of the attendees from Web Visions 04. Many of the short penned messages were serious and to the point. But I laughed at a few of the humorous ones:

The poster was a welcomed surprise, and greatly appreciated. Maybe I’ll get a chance to see you all in Portland next year. Thanks to all the well-wishers and those who took the time to sign the poster — some of whom may not have even known the person (me) the card was going to. I’m recovering more and more each week, and physical therapy seems to be doing wonders in strengthening my back and abdominals and getting everything more limber than I’ve ever been. Cartwheels in no time, right?

Update: Matt Haughey just pointed me to two pictures he took of people signing the poster at the event. (Gives you an idea of its size.) I can imagine the distractions that it must have caused as it was being passed around!